My intruduction into martial arts started with 5 years when I began to practise judo.
Later I trained Taekwondo, in the age of 21 I immigrated into the US. For 6 years I trained Okinawa-Karate.
Even as a child I was fascinated when I watched people fighting with knifes and swords in the movies. 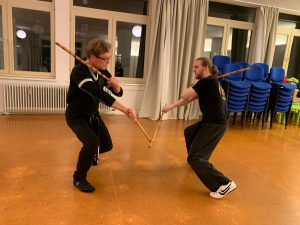 Repeatidely I heard of the fame of Fillipino swordmanship.
The more delighted I was when I met Prof. Greg Lontayao ( 10th dan ) in California 1988.
He introduced me into the Kali Villabrille-Largusa-System. He learned directly under Grandmaster Ben Largusa and the late Grandmaster Floro Villabrille.
In 1991 I moved back to Germany and started a Kali-School with the help of Prof. Lontayao.
I organized several Seminars together wit Prof Lontayao and other high ranking Professors and Guro’s in Germany.
Right now I hold the title of Pangulo na’ Guro of Germany (7th dan).
I respresented the LMAO ( Lontayao Martial Arts Organisation ) at the 2 European Fillipino Martial Arts Seminars.